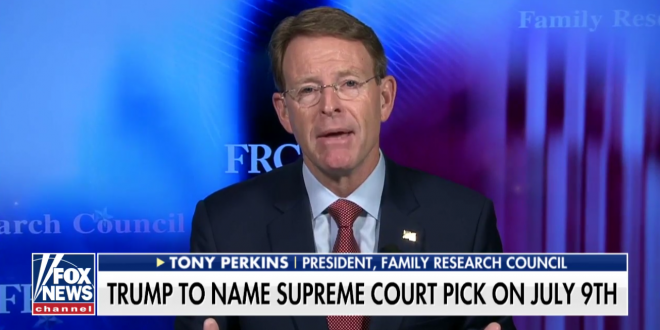 Tony Perkins: Trump Should Say “Game On” To The Left And Pick An Anti-Abortion Hardliner For SCOTUS

“Given the fact that the left wants to make this all about abortion –  and I think it’s much bigger, I think we have religious liberty, we’ve got freedom of speech, the First Amendment in the crosshairs of the left. But they want to make it about life and if I were the president, I’d say, ‘Game on. I’m going to pick someone that’s beyond reproach.’ I think this supercharges the president’s base to get behind him in his pick and I think that spills over into the midterm election.

“This is about religious freedom. It is about the issues of the sanctity of human life. He’s kept his political promises. This was at the top of his promises. And the president, as he has throughout his life, has sailed into the wind, not away from it. I think he should take this challenge from the Democrats and select a candidate that is beyond reproach on human life.” – Hate group leader Tony Perkins, speaking today on state television.