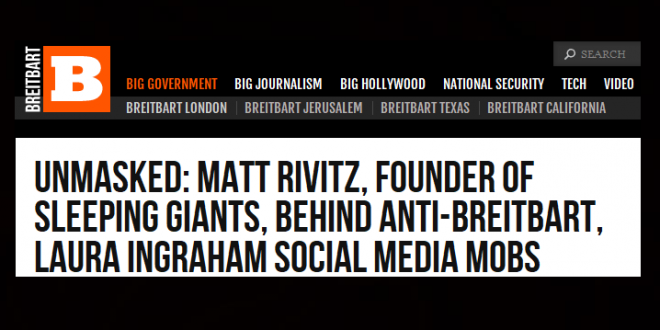 The founder of Sleeping Giants, a left-wing activist group that has targeted right-wing voices with boycott campaigns, has managed to keep his identity a secret, even as his own group has become a major political player among liberals. Until now. Sleeping Giants was founded by Matt Rivitz, an award-winning ad copywriter based in San Francisco, a Daily Caller News Foundation investigation has found. Following this article’s publication, Rivitz confirmed that he founded Sleeping Giants.

The group’s original stated goal was to cripple Breitbart, the pro-Trump website whose former chairman, Steve Bannon, worked in the White House as President Donald Trump’s chief strategist. To accomplish that goal, Sleeping Giants has waged an intense campaign to pressure Breitbart’s advertisers into pulling their ads from the website. It’s worked pretty much as designed.

Breitbart lost 90 percent of its advertisers over the span of two months in 2017. Sleeping Giants has both maintained its pressure on Breitbart’s remaining advertisers and expanded its focus. Sleeping Giants began pressuring investors in October 2017 in Renaissance Technologies — a successful hedge fund — to pull their investments because the company’s CEO, conservative billionaire Robert Mercer, had a financial stake in Breitbart. Less than two weeks later, Mercer sold his stake in Breitbart and stepped down from the hedge fund.

The Next Web reports:

The article’s purpose, it would appear, is to expose the personal information of the founder of Sleeping Giants. However, its author is either ignorant or malicious – he also included the founder’s wife’s name, the name of one of her Facebook friends, their location, former employer, and a former school: everything a bad actor needs to wage a harassment campaign.

Perhaps it wasn’t the author’s intent to sic people with ill-intent on an enemy of Breitbart. But, in 2018, you have to wonder how daft a journalist would have to be not to understand the implications of such an act. It further boggles the mind to suppose such complete ignorance would also extend to whomever does the editing and approvals at The Daily Caller.

Last night, @peterjhasson from @dailycaller decided to publish my name as well as the names of my family & friends.

And, curiously, a tweet I wrote to Ikea customer service. Which is weird. pic.twitter.com/DVhJt1p90L

Previous Most GOP Pols Privately Say Trump Is Un-American But Won’t Call Him Out Because They Fear His Rabid Fans
Next GOP Rep: I Don’t Care If Trump Misspeaks [VIDEO]