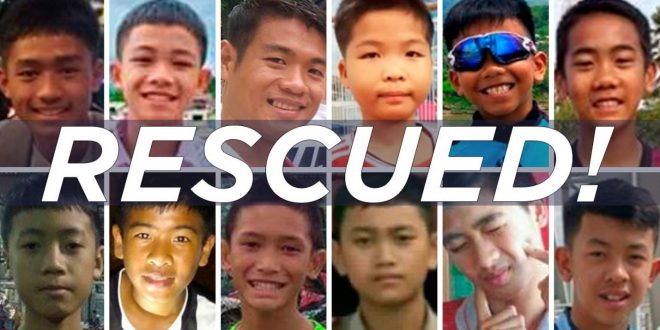 The third phase of the high-risk rescue operation for the boys and their coach trapped in a cave in Thailand played out quickly on Tuesday. Hours after Thai officials confirmed that 19 divers had entered the cave complex in Chiang Rai province to extract the remaining four children and their assistant coach, several of them were brought out on stretchers.

Four boys were rescued Sunday and an additional four emerged on Monday. The boys, ages 11-16, and their 25-year-old assistant coach became stranded when they went exploring inside after a practice game. Monsoon flooding blocked their escape and prevented rescuers from finding them for almost 10 days.

Rescuers have been taking the strongest boys out first. It may seem counter-intuitive, but the reasoning for that was that officials wanted the boys who have the best chance of surviving to get through the escape route first.

THEY’RE OUT! After more than 2 weeks trapped in darkness, all 13 have been rescued from Thailand’s #ThamLuang cave complex https://t.co/xGvSQ3Byji pic.twitter.com/TRqu8pYPza

Previous Tony Perkins Hails GOP Maine Gov. Paul LePage: The Real Torture Is Denying Help To People Who Want It
Next REPORT: It Was Always Going To Be Brett Kavanaugh