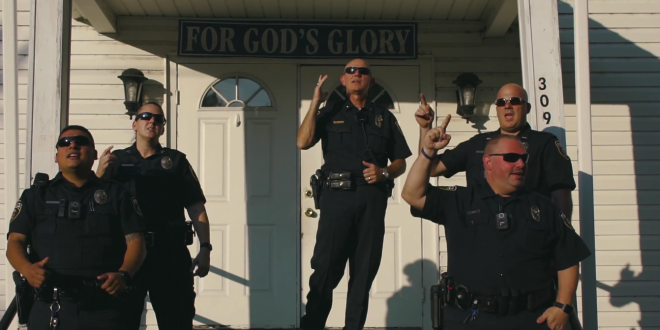 In a bizarre and possibly unconstitutional promotion of religion, the Crandall Police Department in Texas just posted a Facebook video of officers lip-synching to the theme song from God’s Not Dead. It’s not just the lyrics of the song that are problematic. The camera shows the phrase “In God We Trust” on their vehicles as if — and you’re never going to believe this — it’s not just our national motto but a phrase promoting the Christian God’s existence. At another point, an officer is seen reading a Bible. Police Chief Dean Winters — the guy you’d expect to prevent these violations from occurring — is front and center with the singing.

Due to NUMEROUS requests from our Citizens… Here it is!!! The Crandall Police Department’s Lip Sync Challenge. What an awesome way to create conversations and relationships with the community. Have fun in life, keep safe and be humble… We Challenge Kaufman County Criminal District Attorney Investigators and the Wilbarger County Sheriff’s Office.

The Crandall Police have blocked the clip from embedding and have apparently had mirrors removed from YouTube. You can see it at their link above. The original 2012 song, which has 71 million views, is below.