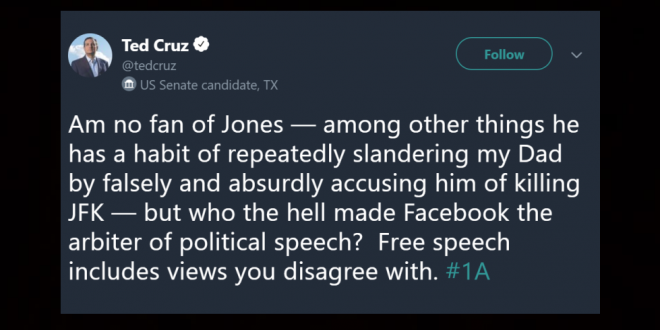 Texas Senator Ted Cruz took some time out of his busy schedule of being generally hated by everyone on Saturday to defend conspiracy theorist and Infowars grifter Alex Jones against a temporary suspension on Facebook.

For once, Cruz struck a centrist position, albeit one between him and Infowars: He disapproves of what Jones says, but he will defend to the last bad tweet Jones’ right to defame mass shooting survivors and their families to hundreds of thousands of Facebook followers.

His tweet on Saturday confused legal experts, considering the First Amendment applies to government regulation of speech. As a private entity, Facebook has the right to curate what can and cannot appear on its website. Cruz knows this. He lambasted NFL players for their peaceful protests against police brutality. Cruz tweeted in late 2016 that athletes should “stop insulting our flag, our nation, our heroes.”

Cruz was not alone in this sentiment, or the solid legal standing he enjoyed. Many legal experts, including those were sympathetic to the NFL players’ cause, acknowledged that the NFL had the right to regulate what the players could do on the field. Nevertheless, in the eyes of Cruz, it sounds as if free speech doesn’t always include “views you disagree with.”

Am no fan of Jones — among other things he has a habit of repeatedly slandering my Dad by falsely and absurdly accusing him of killing JFK — but who the hell made Facebook the arbiter of political speech? Free speech includes views you disagree with. #1A https://t.co/RC5v4SHaiI