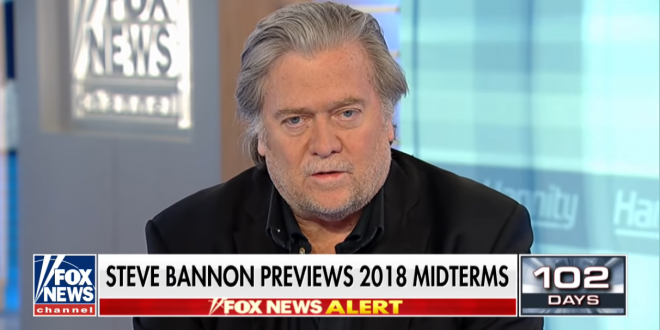 Steve Bannon Warns Right Wingers: If You Don’t Vote For RINOs, Trump Might Get Impeached [VIDEO]

According to Steve Bannon, if Democrats take back the House, their very first action will be to launch impeachment proceedings against Glorious Leader. He’s probably not wrong.

On Friday night, former White House Chief Strategist Steve Bannon appeared on Hannity to warn Trump voters about the possibility of Democrats taking back Congress in the 2018 midterms. He referred to the “Tea Party sweep” in 2010 as the winning strategy for Republicans to hold onto Congress, which includes “going door-to-door, ring doorbells, do voter registration drives, and get people out.”

“This is a national referendum. Whether it’s a RINO, whether it’s an establishment figure, whether it’s either a congressman or a senator that you don’t fully support, that is not the question now,” Bannon pleaded to Trump voters. “The question is about President Trump and his agenda. And you’re gonna have to sometimes vote for people that you’re not totally comfortable with, okay? That means some establishment figures, some RINOs. It doesn’t matter.”