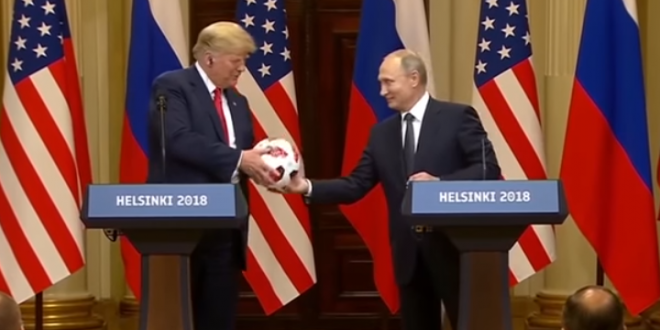 The ball is bugged. Several critics warned President Trump last week to be wary of a gift from Russian President Vladimir Putin after the pair met in Helsinki, Finland. And it appears their concern was justified — sort of. Markings on a soccer ball the Kremlin leader tossed to Trump indicate that it contains a chip with a tiny antenna meant to transmits to nearby phones.

But rather than a clandestine spying device, the chip inside the ball is an advertised feature. The device within the commemorative ball allows fans of the world’s most popular sport to access player videos, competitions and other online fun by placing phones or other mobile devices near to the ball, according to Adidas’ website. The high tech ball is currently on sale for $83.

Twitter wags, as you’d expect, are wondering if the chip could have been hacked by the Kremlin.

Previous Possible “Liquid Lake” Detected Beneath Mars’ Surface
Next Fox Analyst: Trump Has No Attorney-Client Privilege With Tape, They Were Discussing Committing A Fraud