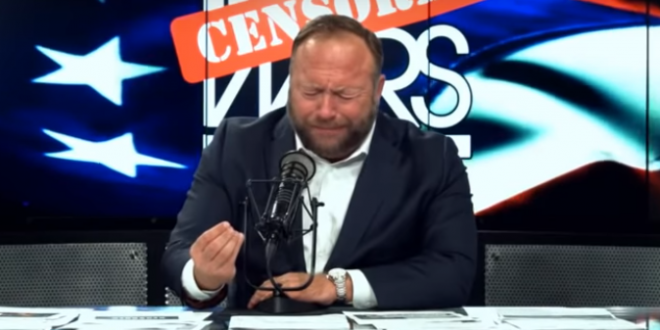 “Everything we did as species, all of our beauty and all of our goodness, will just fail and we’re going to go down the tubes because a bunch of inbred child molesters in Hollywood had some psychotic dream that they wanted to kill everybody. You’ve betrayed your birthright to your family, to everything people did for you, you piss on it and you shit on it and you think you’re strong because you did something bad, and then you sit there when we’re two inches away from collapsing like Venezuela.

“There will be death in the streets, millions [will] starve to death, it’ll never be on the news — and you’ll be so stupid you’ll never even know how you shit on everything good, how you crapped all over your birthright when it was handed to you on a golden platter.” – Alex Jones, literally sobbing as he attacks his own fans for not mobilizing against a brewing Spotify boycott because the streaming service is now hosting his podcasts.