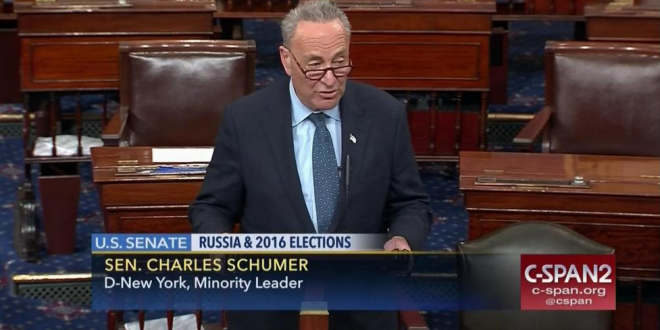 Sen. Chuck Schumer: Does Putin Have Dirt On Trump?

“What could possibly cause President Trump to put the interests of Russia over those of the United States? Millions of Americans will continue to wonder if the only possible explanation for this dangerous behavior is the possibility that President Putin holds damaging information over President Trump. For the president of the United States to side with President Putin against American law enforcement, American defense officials, and American intelligence agencies is thoughtless, dangerous, and weak. The president is putting himself over our country.” – Sen. Chuck Schumer, via press release.

Previous Lawsuit Claims Kushner Co Exposed Kids To Cancer Agents In Campaign To Drive Tenants Out Of Building
Next House Speaker Paul Ryan Issues Flaccid Rebuke: The President Must Appreciate That Russia’s Not Our Ally