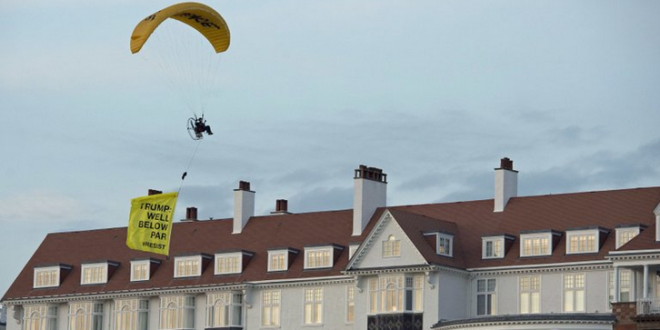 Scottish police say they are trying to trace a paraglider who flew a Greenpeace protest banner over the golf resort that President Donald Trump is staying at. Detective Inspector Stephen McCulloch said the protester breached a no-fly zone over Turnberry hotel and committed a criminal offence.

Greenpeace said the glider carried a banner reading “Trump: Well Below Par” on Friday night to protest his environmental and immigration policies. The group claimed that the protest forced Trump to take cover, with a statement saying “as the glider appears overhead the president can be seen making for the entrance breaking into a trot.”

Donald Trump’s arrival with the First Lady at his Turnberry golf course in Scotland has been met with a protest from the air. A Greenpeace paraglider propelled past him with a banner saying ‘Trump well below par’ – it was in protest at his stance on green issues. Watch video here pic.twitter.com/xvhLByfnYo

A paraglider with a banner message saying “Trump Well Below Par” flew above the Turnberry resort on Friday evening #UKTrumpvisit pic.twitter.com/P17xcNZJKE