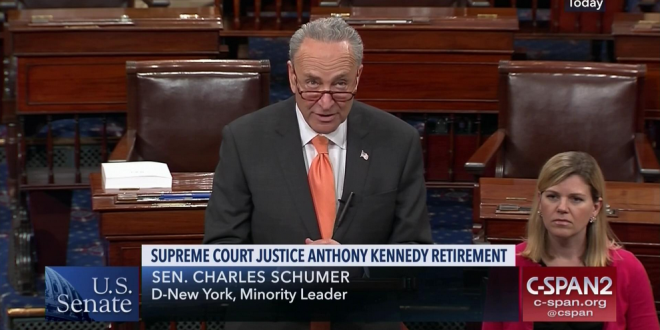 Trump had called Schumer on Tuesday afternoon for a Supreme Court-centered conversation that lasted less than five minutes, according to a person familiar with the call. Schumer, the person said, pressed the president to name Garland to succeed Kennedy, arguing doing so would help unite the country.

Schumer also warned the president that nominating a jurist who would be hostile to Roe vs. Wade, the landmark 1973 decision that established a woman’s right to an abortion, and to Obama’s signature health-care law, would be “cataclysmic” and damage Trump’s legacy, the person added, requesting anonymity since they were not authorized to speak publicly.

Previous Pastor Who “Laid Hands” On Trump Slays With “Holy Laughter,” Says Same Will Happen To All Those In Office
Next Former MSNBC Host Ed Schultz Dies At Age 64