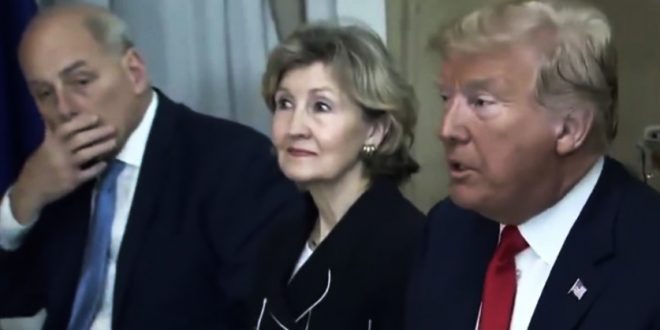 Sarah Sanders: John Kelly Grimaced At Trump’s Attack On Germany Because He Didn’t Like His Breakfast

President Trump kicked off his trip to Europe with a biting critique of the United States’ longtime allies, declaring at a breakfast meeting that Germany “is captive to Russia.” Next to him, three of his senior officials seemed uncomfortable at times, pursing their lips and glancing away from the table.

NATO Secretary General Jens Stoltenberg remains stoic as Trump lays out his complaint, but U.S. ambassador to NATO Kay Bailey Hutchison and White House Chief of Staff John F. Kelly look uncomfortable. Hutchinson appears to avert her gaze from her NATO colleagues sitting across from her, while Kelly looks down, then shifts his body and glances away, lips pursed tightly.

In a statement to The Post, White House press secretary Sarah Huckabee Sanders said, “[Kelly] was displeased because he was expecting a full breakfast and there were only pastries and cheese.”