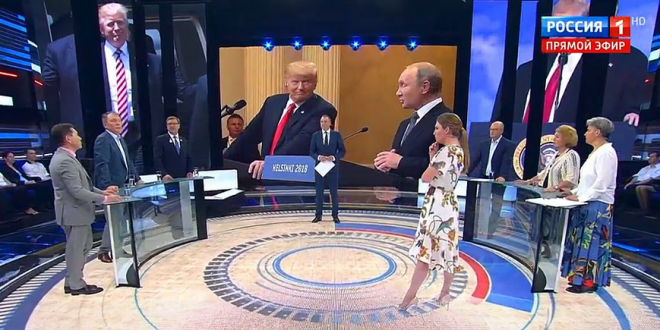 Russian state media are hard at work, praising Putin’s strategy that is finally paying off. That is not surprising, as the state media in Russia are fully controlled by the government. Positions conveyed by the Kremlin’s bullhorns reflect only what is considered permissible by the state. On Russian state television, criticism of Putin is unheard of, and mildly dissenting views are allowed mostly so they can be mocked. Government-controlled propaganda, combined with fear of retribution, secure consistently high approval ratings for the seemingly irreplaceable Russian leader. Putin is always portrayed as a masterful chess player whose every move is pure genius.

#Russia‘s state TV host:
“It is very bizarre, you can’t bash your own country like that – especially when you’re the President.”
Female host: “When Trump says our relations are bad because of American foolishness and stupidity, he really smells like an agent of the Kremlin.” ©️ pic.twitter.com/8fRLrZbUul