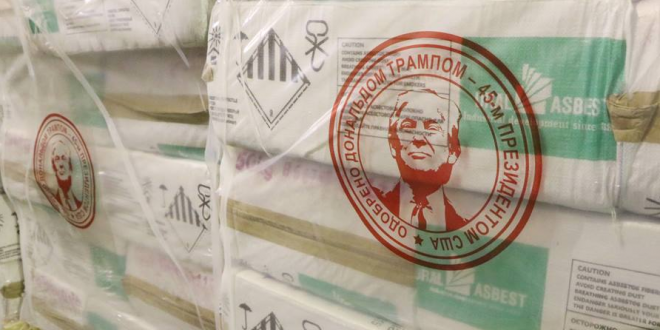 Russian Mining Company Places Trump’s Seal Of Approval On Asbestos Pallets: Donald Is On Our Side!

Donald Trump’s environmental policies may have caused controversy in the US but the president’s stance has managed to get him a literal stamp of approval from a Russian mining company. Uralasbest, one of the world’s largest producers and sellers of asbestos, has taken to adorning pallets of its product with a seal of Trump’s face, along with the words “Approved by Donald Trump, 45th president of the United States”.

The move follows the US Environmental Protection Agency’s recent decision not to ban new asbestos products outright. The EPA said it would evaluate new uses of asbestos but environmental groups have criticized the agency for not going further by barring them on public health grounds.

Uralasbest, which is located in the mining city of Asbest in the Ural Mountains, is reported to have close ties to Russian president Vladimir Putin, who Trump will meet for talks in Helsinki next week. Asbest was once known as the “dying city” due to its high rate of lung cancer and other asbestos-related health problems.

According to the company’s Facebook post, Trump has declared asbestos to be “100% safe after application.” The post also hails Scott Pruitt and boasts, “Donald is on our side!”