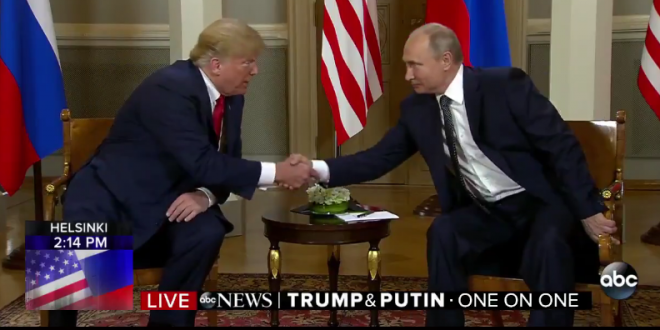 Russia Agrees With Trump: Mueller Is On A Witch Hunt

President Trump will hold one-on-one talks on Monday with Mr. Putin at an exceptionally awkward time, just days after the Justice Department indicted 12 Russian intelligence agents on charges of hacking the Democratic National Committee and Hillary Clinton’s presidential campaign. But Mr. Trump blamed the United States for the tensions between the countries, not Russia.

The meeting will cap a weeklong trip to Europe in which Mr. Trump made his distaste for diplomatic norms abundantly clear: He caused turmoil at the NATO summit meeting and during a visit to Britain by demanding that allies spend more on defense, saying that Prime Minister Theresa May was mishandling Brexit, advising her to sue the European Union over the issue and calling the bloc a “trade foe.”

The Russian foreign ministry on Monday tweeted “we agree” in response to a tweet from President Trump referring to the investigation of the 2016 presidential election as a “Rigged Witch Hunt.” Trump also wrote on Twitter that “years of U.S. foolishness and stupidity” are to blame for poor U.S.-Russia relations ahead of his summit on Monday with Russian President Vladimir Putin.

Trump has said that he will bring up the issue of election meddling in his meeting with Putin, as he said he has done in the past. But he said he expected Putin to again deny that Russia had any role in the election. “I will absolutely bring that up. I don’t think you’ll have any ‘Gee, I did it, I did it, you got me.’ There won’t be a Perry Mason here,” he said Friday.

President Obama thought that Crooked Hillary was going to win the election, so when he was informed by the FBI about Russian Meddling, he said it couldn’t happen, was no big deal, & did NOTHING about it. When I won it became a big deal and the Rigged Witch Hunt headed by Strzok!

Our relationship with Russia has NEVER been worse thanks to many years of U.S. foolishness and stupidity and now, the Rigged Witch Hunt!

President Trump: “It’s great to be with you.”