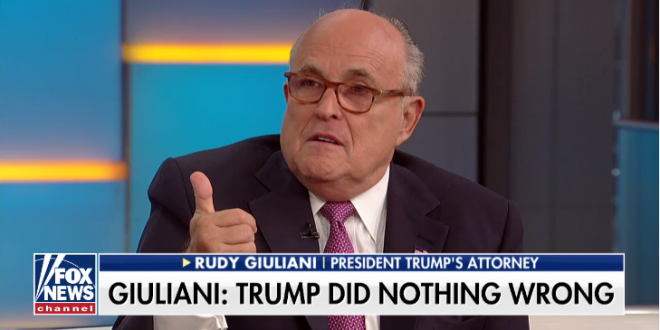 Donald Trump’s personal attorney Rudy Giuliani went on a media blitz Monday morning, during which he claimed “collusion” was not a crime and branded the president’s former lawyer Michael Cohen a “scumbag.”

The former New York City mayor began the day on the president’s favorite morning show, Fox & Friends, where he suggested Trump could not be guilty because the crime doesn’t even exist.

“I’ve been sitting here looking at the federal code trying to find collusion as a crime,” he began the interview with encouragement from host Steve Doocy. “Collusion is not a crime.”

CNN: How do you know he wasn’t there?

GIULIANI: Because Cohen is a liar and Don Jr. says he wasn’t there.

CNN: Don’t they have a self-interest in saying that?

GIULIANI: Well, so does Cohen. pic.twitter.com/jBZSl9I1qm

GIULIANI on MANAFORT trial: “He has no information incriminating of the president. I know that for a fact. They can squeeze him — he doesn’t know anything. He was with him for four months.” pic.twitter.com/pilkNctnMe

GIULIANI argues ***collusion is not a crime***: “I don’t even know if that’s a crime — colluding with Russians. Hacking is the crime. The president didn’t hack! He didn’t pay for the hacking.” pic.twitter.com/QMenE1qzxx

GIULIANI downplays his recent praise for Michael Cohen, who he now characterizes as a serial liar: “George Washington would have said that about Benedict Arnold at a certain point of time.” pic.twitter.com/dldMO029ye

Giuliani hitting the morning TV circuit to say he’s not sure if collusion is a crime pic.twitter.com/hj3980cdUH