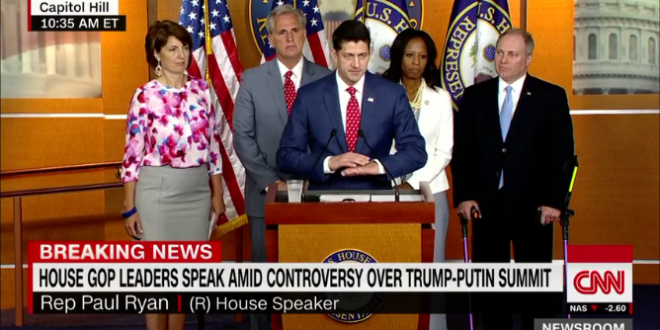 House Speaker Paul Ryan, answering questions at the House GOP’s weekly press conference, said that while he did not believe President Trump’s actions alongside Russian President Vladimir Putin arose to treason as alleged by former CIA chief John Brennan (“I do not,” he said), said he clearly believes “Russia did meddle with our elections.”

“Russia is trying to undermine democracy itself, to delegitimize democracy, so they can be look good by comparison. Let’s be really clear about that,” Ryan said.

“We know they interfered with our elections, and we have passed sanctions on Russia to hold them accountable. More importantly, what we intend to do, is be sure that they don’t get away with it again.”

“Russia is trying to undermine Democracy itself, to delegitimize Democracy, so for some reason they can look good by comparison … We know they interfered with our elections,” says House Speaker Paul Ryan https://t.co/LxMEK5qMIg https://t.co/WrKJEfxidQ

.@SpeakerRyan: Russia meddled in our election and is hellbent on undermining our democracy.

Reporter: Do you agree with @JohnBrennan that what @POTUS did yesterday was treasonous?#PaulRyan: No.

Another shameful performance by @SpeakerRyan, standing by mendacious House report and minimizing Russian attack by claiming it had no impact on election outcome. (How does he know?) https://t.co/1Rt5RtPSm2

It’s cool Paul Ryan is retiring several years after his conscience did.

Speaker Paul Ryan says he is “more than happy” to consider more sanctions on Russia: “I understand the desire and the need to have good relations…but Russia is a menacing government that does not share out interests and it does not share our values” https://t.co/UJ1rqDiBlq pic.twitter.com/3TVulpK4jp

.@SpeakerRyan downplays Russian interference: “It is clear that it didn’t have a material effect on our elections.” (That assertion is not in fact clear at all.) pic.twitter.com/R0Yt1zL6Ln