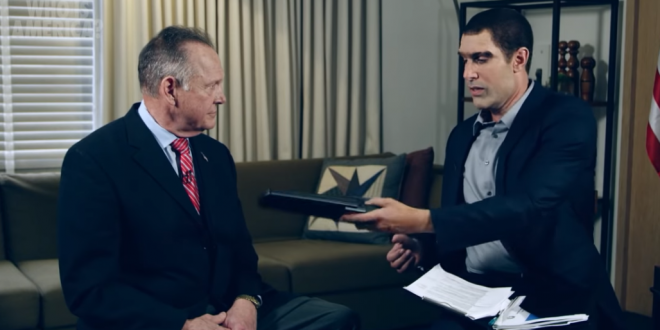 Sacha Baron Cohen’s anti-terror expert Erran Morad was back for the third episode of his fiery new show, “Who Is America?” For Sunday’s episode of the Showtime series, Cohen’s Morad interviewed unsuccessful Republican Senate candidate Roy Moore. During their chat, Cohen dressed as Morad, introduced a piece of “technology” to Moore, which he said would help detect sex offenders.

As Cohen explained it: “It turns out that sex offenders and particularly pedophiles secrete an enzyme for DDHT, which is actually detectable. It is three times the level of non-perverts, so the phrase ‘sweating like a rapist’ is actually based on science. In Israel they’ve developed a machine that is used in schools and playgrounds to detect anyone coming in, and if they detect the pedophile, the wand alerts the law enforcement and schools within a hundred-mile radius.”

You know what happens next. Watch anyway.