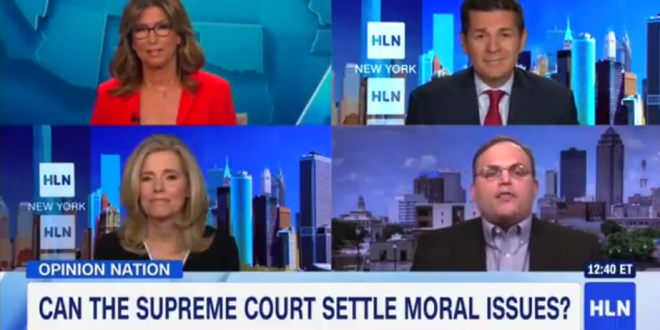 They get very triggered if you mention Christian Sharia:

Obeidallah countered by saying people like Mike Huckabee and Rick Santorum want to turn America into a “Christian version of Saudi Arabia.” As you’ll see below, that’s when Deace flipped out and stalked off the set.

My appearance on @HLNTV — which I abruptly ended when it was clear they wanted a straw man and not a real conversation. Judge for yourself whether I acted properly or not. https://t.co/KnWi3QNfJc

I hadn’t heard of Dean before, but though I work in this industry I’m not a mass consumer of media and that’s on purpose. So there’s lots of people I don’t know. My default setting is to give people I don’t know a fair shake at first. Unfortunately, that wasn’t reciprocated. https://t.co/XxPyJMrF3O

This is an instant classic. Watch Deace bail on these liberal nut-jobs during this CNN interview. https://t.co/ziA5fyQd9A

Previous Mitt Romney Is “Not A Fan” Of Trump’s Trade Wars
Next Panic! At The Disco Frontman Comes Out As Pansexual