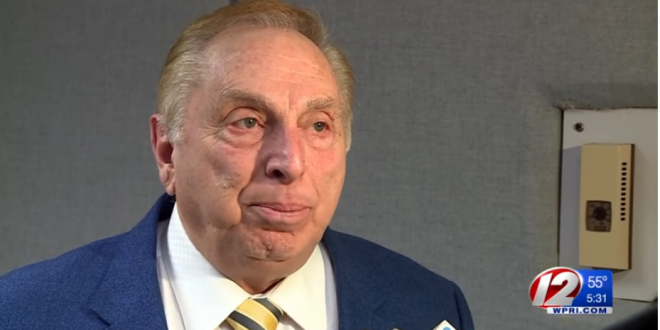 A candidate for governor in Rhode Island had to be rescued by the Coast Guard on Sunday after his yacht hit rocks while blasting music at beachgoers to draw attention to his campaign. Joe Trillo thanked first responders Monday for rescuing him and three others near Charlestown, R.I. He said they hit a rock that wasn’t charted and started taking on water.

The Coast Guard, which posted a photo on Facebook, said Trillo was 100 to 300 yards from shore. The former Republican lawmaker running as an independent has said President Donald Trump inspired his gubernatorial run. It was the second time this month he took his 65-foot yacht, the Lady M, out with a giant campaign sign while playing patriotic music and drawing complaints from some beachgoers.

His strategy was to approach a beach and announce that if elected, one of the many things he would do is put garbage cans on beaches so beachgoers wouldn’t have to carry their trash out in plastic bags. He’d play a John Philip Sousa march on what he describes as “very, very big sound equipment” before leaving for the next beach.

Life imitates Arrested Development when #RIGOV conservative indy Joe Trillo’s campaign yacht hits an uncharted rock while he blasts messages and music to beach goers and the Coast Guard has to rescue him https://t.co/epsiBvRUGx

Just the chair of Trump’s RI campaign, and now candidate for governor, campaigning via yacht. https://t.co/wf3c2tj7C0

Previous Robertson: I Don’t Even Know If Retired Supreme Court Justice David Souter Is Alive, But He’s A Closet Case
Next Trump Told Putin: My Aides Are “Stupid People”