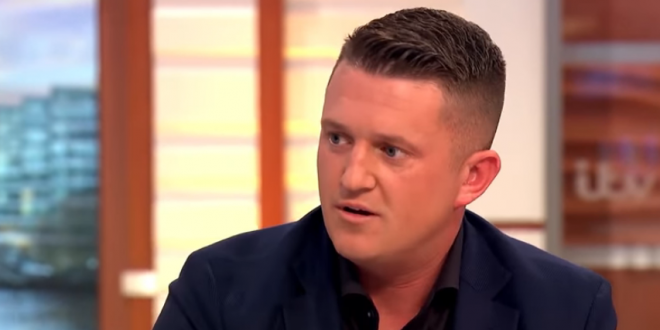 Sam Brownback, the U.S. Ambassador for International Religious Freedom, complained to the British ambassador in Washington D.C. about the treatment of an English right-wing activist who is in jail for disrupting a trial, according to three sources familiar with the discussion.

Brownback raised the case of the activist known as Tommy Robinson in a June meeting with Sir Kim Darroch, Britain’s Ambassador to the United States, according to a British official and two sources close to the organizers of a pro-Robinson demonstration planned for London on Saturday. Robinson, whose real name is Stephen Yaxley-Lennon is a founder of the English Defense League, which has organized violent demonstrations against Islamic immigrants in the UK in the past decade.

Robinson was arrested in late May outside a courthouse in Leeds, England, while making video recordings about a trial related to child molestation and jailed for 13 months for violating English law limiting publicity during criminal trials. Brownback told Darroch that if Britain did not treat Robinson more sympathetically, the Trump administration might be compelled to criticize Britain’s handling of the case, according to the two sources in contact with organizers of the planned pro-Robinson demonstration.

The case has become something of a cause célèbre for the “alt-right” in the US, where activists have defended Robinson’s right to freedom of expression. In May, the president’s son, Donald Jr, retweeted one of Robinson’s supporters, adding: “Don’t let America follow in those footsteps.”

On Friday, Charlie Kirk, a prominent Trump supporter and founder of the conservative student organisation Turning Point USA, attacked the mayor of London in a tweet that said: “Sadiq Khan is trying to lecture the world on ‘free speech’ while Tommy Robinson is locked in a London prison for speaking his mind.”

The EDL was founded in London in 2009; Tommy Robinson, a former member of the British National Party (BNP), soon became its de facto leader. Both online and at demonstrations, EDL members have incited violence against Muslims, with supporters carrying out acts of violence both at demonstrations and independently. The EDL’s reputation was damaged in 2011 after supporters were arrested plotting to bomb mosques and links were revealed with Norwegian far-right bomber Anders Breivik. Many of its leaders had previously been members of fascist organisations and part of its membership endorsed fascist parties.

The first video below is from today.

Previous British Tabloids Savage Trump’s Visit: Fake Schmooze
Next Scotland’s Leader Heads Glasgow Pride Parade, Where She’d Rather Be “No Matter Who Else” Is Here Today