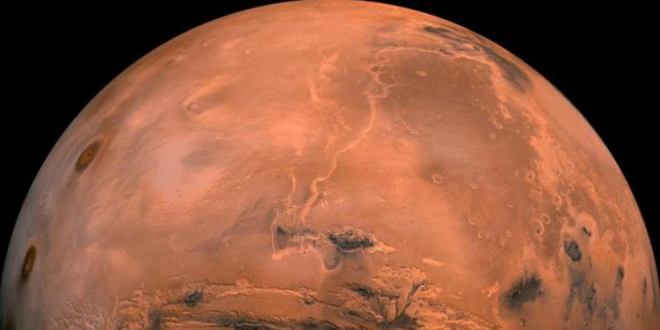 The Italian Space Agency announced Wednesday that researchers have detected signs of a large, stable body of liquid water locked away beneath a mile of ice near Mars’ south pole. The observations were recorded by the Mars Advanced Radar for Subsurface and Ionosphere Sounding instrument—Marsis for short.

“Marsis was born to make this kind of discovery, and now it has,” says Roberto Orosei, a radioastronomer at the National Institute for Astrophysics, who led the investigation. His team’s findings, which appear in this week’s issue of Science, raise tantalizing questions about the planet’s geology—and its potential for harboring life.

Marsis collected its evidence from orbit, flying aboard the European Space Agency’s Mars Express spacecraft. It works by transmitting pulses of low-frequency electromagnetic waves toward the red planet.

The Mars Express team compares the discovery to lakes tucked beneath the ice sheets of Greenland and Antarctica, which are sometimes huge and certainly more than capable of hosting life as we know it.

But not everyone is convinced that the “lake” is actually a lake. Even according to the team, it could instead be a deposit of dampened sludge, more like muddy sediments than a pocket filled with liquid. Determining the exact nature of the structure will require a different instrument, Pettinelli says.

“We can’t choose between one or the other. We don’t have enough information to say this is a lake or saturated sediment like an aquifer,” Pettinelli says. “The lake will be more interesting.”