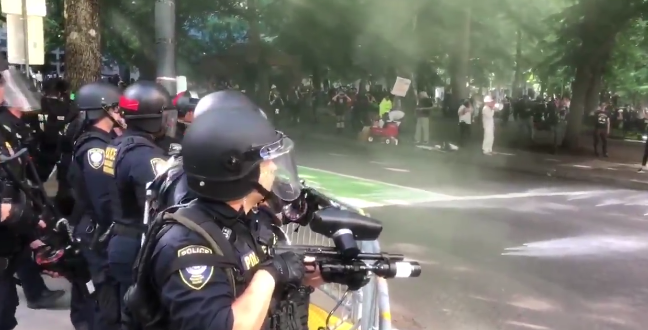 PORTLAND: Riot Police Shut Down Rally For Extremist GOP US Senate Candidate After Clashes With Antifa

Portland Police declared a riot Saturday after tensions between the right-wing Patriot Prayer group and local anti-fascist activists came to a head and broke out in violence. The afternoon began with a permitted rally at Terry Schrunk Federal Plaza organized by Joey Gibson, U.S. Senate candidate for Washington and leader of the right-wing, Vancouver-based group.

A counter-demonstration by masked local anti-fascist groups gathered nearby among a heavy police presence. Officers seized weapons such as utility knives, clubs and chemical sprays, detaining several protesters early on. The Patriot Prayer grouped numbered nearly 150, while the counter-demonstration boasted attendance at least twice that. Combined, the dueling protests were a fraction of an earlier march in support of immigrant children separated from their parents at the southern border.

The conservative rally in the federal plaza was a typical affair for the Vancouver-based political figure. Gibson said he wanted to “bring light into a city that’s full of darkness,” verbally bashing Portland Mayor Ted Wheeler and Oregon Gov. Kate Brown.

A bus load of Proud Boys and supporters just arrived at Terry Schrunk Plaza as several folks remarked “the party is here!” or, alternately, “now the party’s gettin started!” pic.twitter.com/dRM20Nu9Xy

As is typical, there are at least twice as many #DefendPDX counter demonstrators in Chapman Square as there are Patriot Prayer supporters in the plaza. pic.twitter.com/O2DQuTsIP8

Lots of talk equating today’s federal government with King George. Gibson says he’s here to battle “the darkness in this city” and evil creeping through the country. No details. pic.twitter.com/yk2ymQx0n8

The dude in this Ninja Turtle/Pepe getup was one of few who did not remove their headgear for the national anthem. pic.twitter.com/NdCRfx6gwS

Patriot Prayer members have spilled into Third Avenue in front of the plaza. A pair of them told a couple of Nat’l Lawyers Guild legal observers “whores,” then “sluts,” shouting “and we’re going to KEEP winning elections.” pic.twitter.com/r86bqaXaU4

Portland police have officially declared a riot and are ordering people to leave immediately. pic.twitter.com/yIJKOq1s93