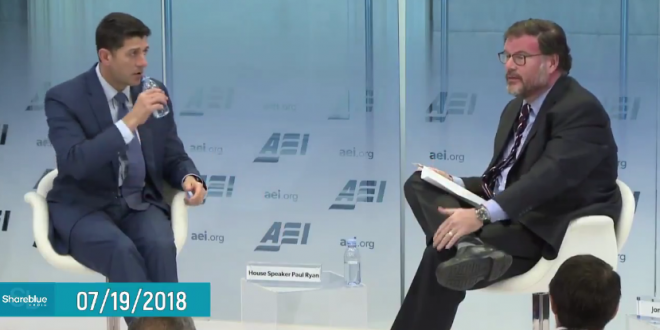 Speaker Paul Ryan had a bit too rollicking of a time when he heard this joke. Speaking with the National Review‘s Jonah Goldberg at the American Enterprise Institute, Ryan laughed a bit too hard (read: way too hard) at a joke comparing President Donald Trump and Adolf Hitler – and it was favorable to Hitler.

“As I keep trying to tell people on the resistance sort of left, Donald Trump is not Hitler,” Goldberg said. “Hitler could’ve repealed Obamacare.” At this, Ryan guffawed. And then he laughed some more. And a little more after that. “That’s really good,” he said through even more laughter.

In which Paul Ryan laughs a little too hard at a Trump/Hitler joke pic.twitter.com/0RUNkyYrKb