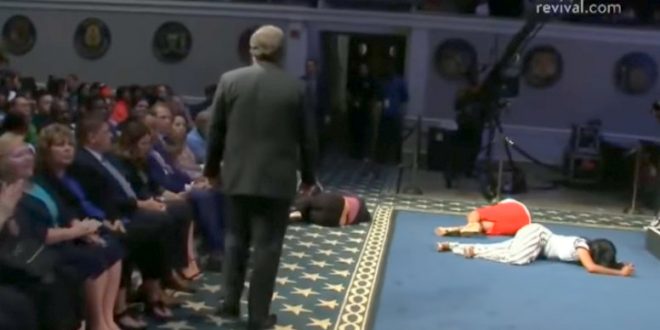 Pastor Who “Laid Hands” On Trump Slays With “Holy Laughter,” Says Same Will Happen To All Those In Office

Rodney Howard-Browne, a right-wing pastor and radical conspiracy theorist who laid hands upon and prayed over President Trump in the Oval Office last year, is currently hosting a week-long “Celebrate America” event in Washington, D.C, that is designed to prepare for “the Great Awakening that is soon to come.”

During Monday’s service, Howard-Browne brought his patented “Holy Laughter” revival to the nation’s capital and proclaimed that soon the entire federal government will be unable to function because our elected leaders and government officials will be unable to stand up or speak after being overwhelmed by the power of the Holy Spirit.

This nujob’s “holy laughter” crusade, which of course includes speaking in tongues, has earned mockery even from some evangelicals.

Last month he declared that anybody who makes fun of it is going to hell for “blasphemy.” There are dozens of “holy laughter” clips on YouTube.