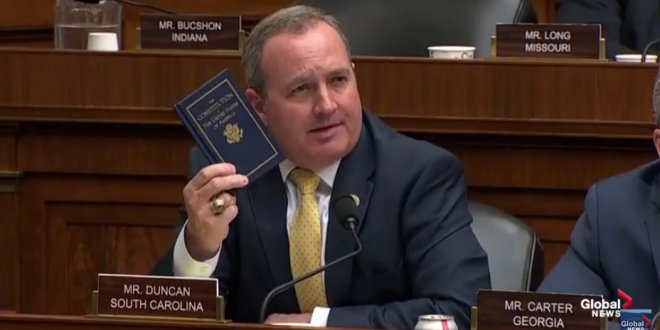 Old Glory Only Act: 33 House Republicans Back Bill That Would Forbid US Embassies From Flying Rainbow Flag

A Republican lawmaker in the U.S. House has introduced legislation that appears to be aimed at barring U.S. embassies from flying the Pride flag in recognition of the LGBT community. With little fanfare last week, Rep. Jeff Duncan (R-S.C.) quietly introduced the measure, which seeks to “prohibit the flying of any flag other than the United States flag over United States diplomatic and consular posts, and for other purposes.”

Although the title of the legislation is public, the full text of the legislation isn’t online at the Library of Congress website. Duncan’s office didn’t respond to the Washington Blade’s comment for information. The bill has 33 co-sponsors, many of whom with notoriously anti-LGBT records, including Reps. Vicky Hartzler (R-Mo.), Steve King (R-Iowa), Jim Jordan (R-Ohio) and Louie Gohmert (R-Texas).

The bill was introduced after a few recent incidents in which a rainbow flag symbolizing gay pride and LGBT rights was flown above some embassies. However, the bill would ban all other flags from being flown with the American flag, not just the rainbow flag.

“The United States flag is the single greatest symbol of freedom the world has ever known, and there’s no reason for anything but Old Glory to be flying over our embassies and posts around the globe,” Duncan said in a statement to the Washington Examiner.

RELATED: Duncan last appeared on JMG when he waved a copy of the US Constitution at Mark Zuckerberg, stupidly claiming that Facebook was violating the First Amendment rights of conservatives, a common claim made by right wingers who don’t actually understand the First Amendment.