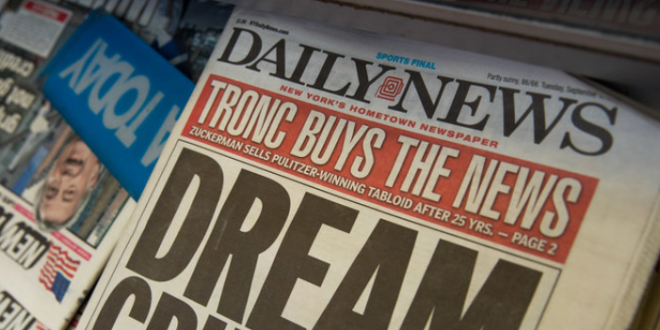 NY Daily News Slashes Half Of Its Newsroom Staff

The New York Daily News announced on Monday plans to eliminate half of its newsroom as part of a broader effort to refocus the newspaper. Daily News staff was notified of the cuts in an email sent by the company’s human resources department that also detailed a new direction for the paper, with an increased focus on breaking news with particular attention paid to crime, civil justice and public responsibility. It will still cover local news and sports, the email said.

The first tweet below is from their now-former editor.

If you hate democracy and think local governments should operate unchecked and in the dark, then today is a good day for you.

The grim news officially arrives at the New York Daily News, where staffers were just informed that Tronc is reducing the “size of the editorial team by approximately 50 percent and re-focusing much of our talent on breaking news.”

This is awful. Tronc is a public menace. https://t.co/VSwJHOKbVQ

The looming NY Daily News jobs massacre should remind all of us how dire the journalism crisis is. The NYDN has become beloved (by many) for its anti-Trump front pages that get thousands of re-tweets — which bring in ZERO dollars.

These NYDN cuts are terrible news. Their coverage of New York’s state and local government is especially important. And the paper is important to me as a place I got started writing op-eds.

This NYDN news is fucking horrific. A great paper, serially mismanaged by a bunch of rapacious half-brains. And now all of New York will pay the price.