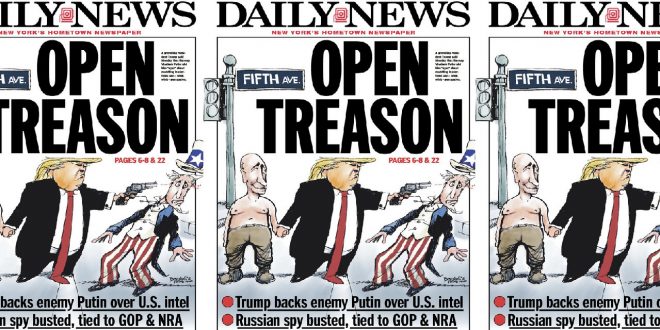 From the New York Daily News editorial board:

Before the entire world Monday, the self-styled tough-guy, America-First President revealed himself to be Russian President Vladimir Putin’s poodle. Putin flatly denied what every U.S. intelligence agency has concluded, what new indictments by Special Counsel Robert Mueller now underline: That agents of the GRU, the intelligence agency Putin used to work for and still leads, spearheaded 2016 presidential election interference.

The Russian president counters the mountain of evidence with an empty and robotic assertion: “the Russian State has not interfered and will never interfere in internal American affairs.” “We’re all to blame,” said the American President Monday, the foreign-policy equivalent of his “both sides” drivel after a white supremacist rally in Charlottesville. It would be high comedy if it were not a national tragedy. And a national emergency.