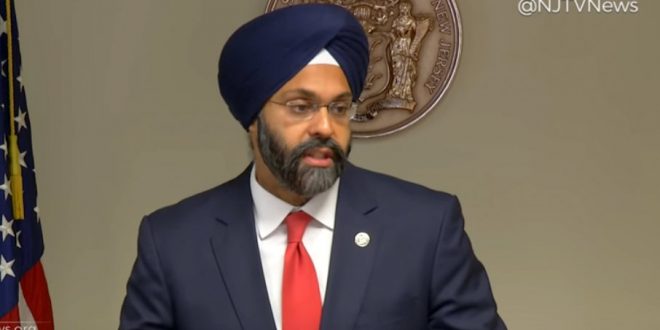 A pair of hosts on one of New Jersey’s top radio stations have been bounced from the airwaves after they mocked the state’s attorney general — who is a Sikh-American — as “turban man” on the air, the station said early Thursday.

“You know the new attorney general? I’m never going to know his name, I’m just gonna say the guy with the turban,” said Dennis Malloy. “Turban man!” Judi Franco could be heard saying. Malloy, laughing, then blames Grewal, who wears a turban as part of his faith, for his inability to remember his name.

“If it offends you, then don’t wear the turban, man, and I’ll remember your name,” Malloy laughed. “But Turban Man — is that highly offensive?” “To me? No. To people who wear turbans, could be,” replied Franco.

.@nj1015: My name, for the record, is Gurbir Grewal. I’m the 61st Attorney General of NJ. I’m a Sikh American. I have 3 daughters. And yesterday, I told them to turn off the radio.

We are aware of the offensive comments made by Dennis and Judi during Wednesday’s broadcast. We have taken immediate action and have taken them off the air until further notice. We are investigating the matter and will have further comment shortly.https://t.co/kudnFRAAVt

I’m truly appalled by the derogatory & hateful comments made today on the “Dennis and Judi Show” about NJ Attorney General Gurbir Grewal. Our residents shouldn’t have to hear these types of crude remarks made over the airwaves regarding a person’s religious beliefs and practices.

We are New Jersey; bigotry has no place, religious intolerance no harbor.

We all should denounce this ignorant and outrageous attack.https://t.co/8HrcjAEl5K

Outraged by the abhorrent and xenophobic comments mocking @NewJerseyOAG on The @DennisandJudi Show on @nj1015.

Hate speech has no place in NJ, and does not belong on our airwaves.

Station management must hold the hosts accountable for these intolerant and racist comments.

This is not the first indignity I’ve faced and it probably won’t be the last. Sometimes, I endure it alone. Yesterday, all of New Jersey heard it. It’s time to end small-minded intolerance. It’s an issue I addressed at @APAICS conference this May: pic.twitter.com/XnxJp53cxv