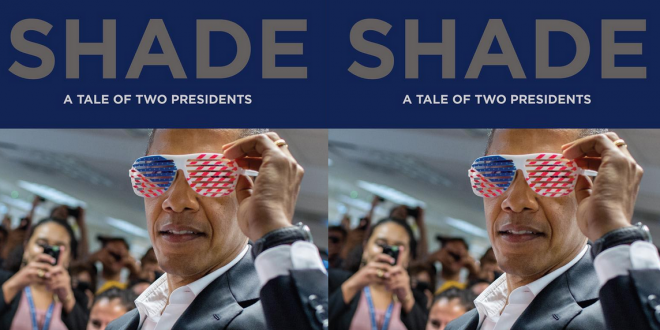 This will surely be fantastic:

Former White House photographer Pete Souza on Wednesday revealed the cover of his upcoming photography book about the Trump and Obama administrations. Publisher Little, Brown and Company announced “Shade: A Tale of Two Presidents” earlier this year, saying that the book would contrast the two presidents with “unforgettable images of President Obama delivering new power and meaning when framed by tweets, headlines, quotes, and other material from the first 500 days of the Trump administration.”

From the book’s Amazon pitch:

As Chief Official White House Photographer, Pete Souza spent more time alongside President Barack Obama than almost anyone else. His years photographing the President gave him an intimate behind-the-scenes view of the unique gravity of the Office of the Presidency–and the tremendous responsibility that comes with it.

What began with Souza’s Instagram posts soon after President Trump’s inauguration in January 2017 has become a potent commentary on the state of the Presidency, and our country. Some call this “throwing shade.” Souza calls it telling the truth.

In Shade, Souza’s photographs are more than a rejoinder to the chaos, abuses of power, and destructive policies that now define our nation’s highest office. They are a reminder of a President we could believe in, and a courageous defense of American values.

If OBAMA: An Intimate Portrait is a coffee table book, then SHADE is an every table book. If you’ve been following my Instagram feed since the last inauguration, then you have an idea what this book is about (but of course there will be some surprises). To pre-order, follow link in my profile.