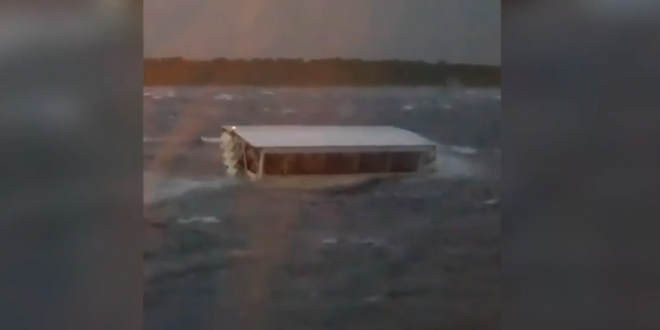 A tourist duck boat capsized in a lake near Branson, Missouri amidst powerful storms, killing at least 13 people, including children, Stone County Sheriff Doug Rader said. The Thursday night accident also injured seven people and has left six others missing, officials said. A total of 29 passengers and two crew members were on board the amphibious craft at the time, Rader said.

Severe evening thunderstorms, including winds in excess of 60 mph, struck the area at the time of the sinking. Eyewitness video showed the craft, which travels on land and water, taking on water as waves lashed at its sides. “The wind really picked up bad and debris was flying everywhere,” Allison Lester, who was on a nearby boat, told “Good Morning America” Friday. “The waters were rough.”

BREAKING: This is video of what the waves were like on Table Rock Lake in Missouri tonight when the duck boat capsized. Man in this video says, “Never quite seen it this bad. Boats can’t get in. Boats can’t get out.” (Credit: Lakeside Resort) pic.twitter.com/HxB8aY2u0a

NEW VIDEO: This is video from the second duck boat that was also out on the water sent to us by Paul. He and family are visiting from Texas.

This boat made it back safely…but it shows how wild the lake conditions were. pic.twitter.com/fVpKuWDEy6

Previous Trump Advisors Furious Over Dan Coats Interview
Next Pirro Whines To Hannity: Whoopi Treated Me Like A Dog, Literally Spat At Me, Told Me To Get The Fuck Out