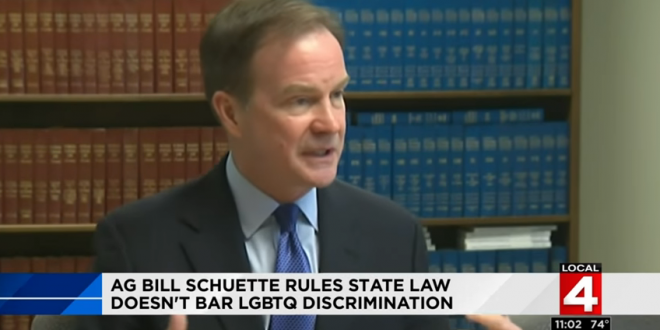 In a legal opinion sure to reverberate through his campaign for governor, Republican Attorney General Bill Schuette on Friday deemed “invalid” a new agency interpretation that had extended anti-discrimination protections to gay and transgender Michigan residents. The formal opinion was derided by a Democratic state lawmaker as an attempt to “trample” on the gay community but praised by a conservative attorney who had considered legal action on behalf of GOP legislators.

Schuette said the Michigan Civil Rights Commission overstepped its authority in May when it determined that an existing ban on “sex” discrimination also prohibits bias on the basis of sexual orientation or gender identity. The interpretation had been hailed as a major victory for gay rights and prompted the Michigan Department of Civil Rights to begin investigating suspected discrimination.

Schuette’s opinion drew swift and sharp criticism from advocates for LGBTQ rights. “This means LGBTQ Michiganders still can be fired from their job and denied housing and public services,” said Lonnie Scott, executive director of the liberal group Progress Michigan. Schuette, one of four Republican candidates for governor in the Aug. 7 primary, “is siding with discrimination and bigotry,” Scott said.

Schuette was asked to issue the opinion after the Michigan Civil Rights Commission voted in May to expand the commission’s interpretation of the state’s Elliott-Larsen Civil Rights Act to include protections from discrimination based on sexual orientation and gender identification in employment, education, housing and real estate as well as use of public accommodations and public service.

See Schuette’s full ruling here. As you may recall, it was Schuette’s relentless opposition to same-sex marriage that led Michigan into being one of the four state cases consolidated into Obergefell v Hodges.