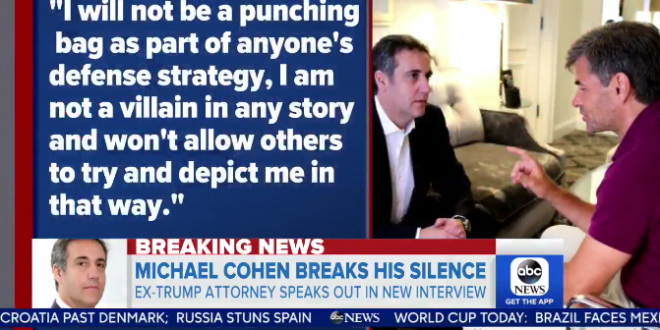 Michael Cohen: I Won’t Be Trump’s Punching Bag, My First Loyalty Is To My Family And My Country [VIDEO]

Michael Cohen — President Donald Trump’s longtime personal attorney and a former executive vice president at the Trump Organization — has always insisted he would remain loyal to the president. He was the fix-it guy, the pit bull so fiercely protective of his boss that he’d once described himself as “the guy who would take a bullet” for the president.

But in his first in-depth interview since the FBI raided his office and homes in April, Cohen strongly signaled his willingness to cooperate with special counsel Robert Mueller and federal prosecutors in the Southern District of New York — even if that puts President Trump in jeopardy.

“My wife, my daughter and my son have my first loyalty and always will,” Cohen told me. “I put family and country first.” When I asked Cohen how he might respond if the president or his legal team come after him — to try and discredit him and the work he did for Mr. Trump over the last decade — he sat up straight. His voice gained strength. “I will not be a punching bag as part of anyone’s defense strategy,” he said emphatically. “I am not a villain of this story, and I will not allow others to try to depict me that way.”

Right now Giuliani, Trump, and Hannity are in a room somewhere trying to decide whether to paint Michael Cohen as a pedophile, drug addict, or mobster.

Michael Cohen tells me in first in-depth interview since FBI raids on his home and office that family and country, not President Trump, have his ‘first loyalty’https://t.co/7r2aM9Tus5 pic.twitter.com/WyZ6IOyGL8

Is Michael Cohen singing a new tune on cooperating with feds? “To be crystal clear, my wife, my daughter and my son, and this country have my first loyalty,” Trump’s longtime fixer tells @GStephanopoulos

Michael Cohen, asked if Trump directed him to make that hush payment to Stormy Daniels or promised to reimburse Trump:

“I want to answer. One day I will answer,” Cohen said. “But for now, I can’t comment further on advice of my counsel.” https://t.co/DsG4PwGNyi

Michael Cohen July 2018: “To be crystal clear, my wife, my daughter and my son, and this country have my first loyalty.”

In @GStephanopoulos‘ exclusive interview with Pres. Trump’s former personal attorney Michael Cohen, Cohen stays mum on commitment to his longtime client: “To be crystal clear, my wife, my daughter and my son, and this country have my first loyalty.” https://t.co/V7gE1FomMf pic.twitter.com/TPu7kkiOpJ