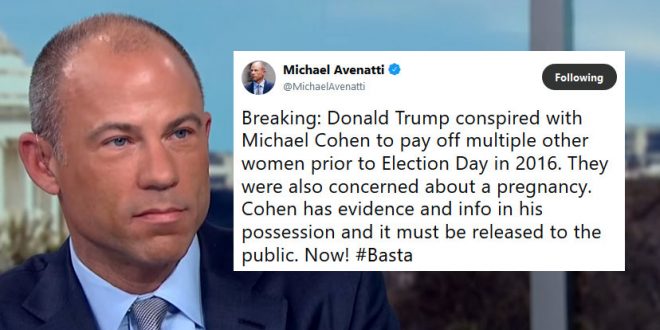 Michael Avenatti: Trump And Cohen Paid Off Multiple Other Women, Were “Concerned About A Pregnancy”

Trump already stands accused of having paid off Daniels, and in tapes published by the New York Times, Trump and Cohen are on record discussing making payments to former Playboy model Karen McDougal.

Additionally, Trump has long been plagued by rumors that he fathered an illegitimate child and paid a former Trump Tower doorman $30,000 to keep quiet about the affair.

Breaking: Donald Trump conspired with Michael Cohen to pay off multiple other women prior to Election Day in 2016. They were also concerned about a pregnancy. Cohen has evidence and info in his possession and it must be released to the public. Now! #Basta

And for the haters out there, check my track record. I don’t make claims that are nonsense.