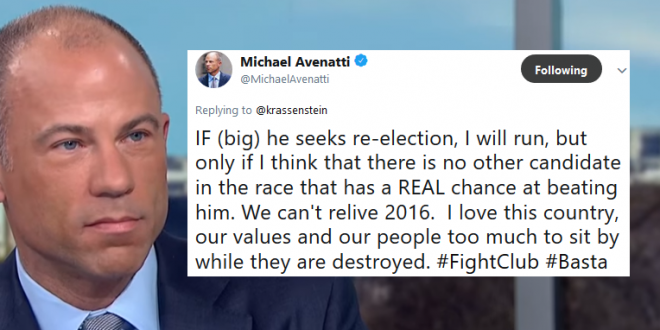 Michael Avenatti, the attorney representing adult-film actress Stormy Daniels, said Wednesday he will run against President Donald Trump if he seeks reelection, but only if he thinks there isn’t another candidate that could beat the president. The tweet came after Avenatti was asked on Twitter when he would announce his 2020 bid. Avenatti represents Daniels, who is suing Trump and his personal lawyer Michael Cohen to invalidate an alleged “hush money” deal to silence the adult-film actress.

When are you announcing your 2020 run?

IF (big) he seeks re-election, I will run, but only if I think that there is no other candidate in the race that has a REAL chance at beating him. We can’t relive 2016. I love this country, our values and our people too much to sit by while they are destroyed. #FightClub #Basta