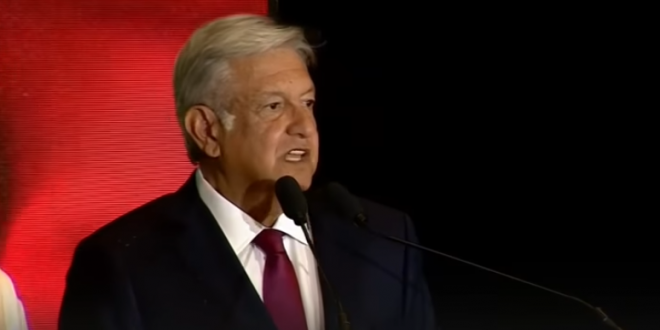 Angry and frustrated over corruption and violence, Mexican voters delivered a tidal wave presidential election victory to leftist Andres Manuel Lopez Obrador, giving him a broad mandate to upend the political establishment and govern for the poor. An official quick count from electoral authorities late Sunday forecast that Lopez Obrador would win with between 53 percent and 53.8 percent of the votes, a remarkable margin not seen in the country for many years.

Lopez Obrador, who campaigned on vows to transform Mexico and oust the “mafia of power” ruling the country, rode widespread voter anger and discontent with the governing Institutional Revolution Party, or PRI, of President Enrique Pena Nieto and had led opinion polls since the beginning of the campaign. The PRI, which dominated Mexican politics for nearly the entire 20th century and recaptured the presidency in 2012, was set to suffer heavy losses not just for the presidency but in other races as well.

Mr. López Obrador’s victory puts a leftist leader at the helm of Latin America’s second-largest economy for the first time in decades, a prospect that has filled millions of Mexicans with hope — and the nation’s elites with trepidation.

The outcome represents a clear rejection of the status quo in the nation, which for the last quarter century has been defined by a centrist vision and an embrace of globalization that many Mexicans feel has not served them.

Even as the electoral rage propelling Mr. López Obrador’s rise is largely the result of domestic issues, there will be pressure for the new president to take a less conciliatory line with his American counterpart. Mexico’s current government, led by President Enrique Peña Nieto, has suffered a string of humiliations at the hands of Mr. Trump with relative silence.

Congratulations to Andres Manuel Lopez Obrador on becoming the next President of Mexico. I look very much forward to working with him. There is much to be done that will benefit both the United States and Mexico!

Mexico’s next president is being described as a left-wing version of president Trump. Huge crowds in Mexico City celebrated Andres Manuel Lopez Obrador’s victory in yesterday’s election. Exit polls predict he won more than 50% of the vote. https://t.co/oAxEjzwQ5a pic.twitter.com/bqY7oA2tqo

Previous CHATTER AWAY: Overnight Open Thread
Next Michael Cohen: I Won’t Be Trump’s Punching Bag, My First Loyalty Is To My Family And My Country [VIDEO]