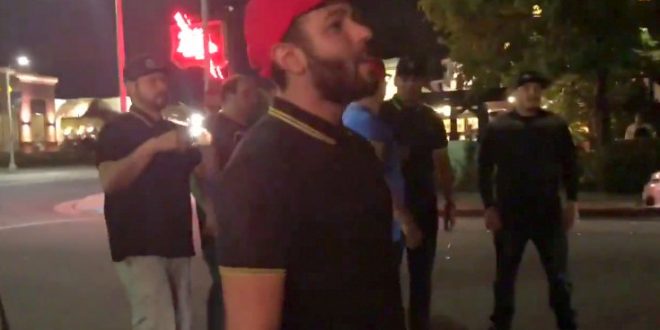 Members of the pro-Trump group “Proud Boys” were chased out of a Los Angeles bar on Saturday by a group of Democratic Socialist protesters. Video from the incident shows the leftwing activists shouting “No Proud Boys, no KKK, no fascist USA” at the group at LA bar “The Griffin.”

The LA chapter of Democratic Socialists of America shared video of the incident on Twitter, in which their members and others from anti-gentrification group Defend North East Los Angeles can be heard chanting and yelling “F-ck you fascist,” “Get out of here, Nazi” and “Facist pigs, squeal … you’re all swine.”

Last night our members and allies in @defendnela ran a proud boy meet up out of the Griffin in Atwater Village. The bar knew about it and the manager defended them, but we shut it down anyway. Don’t let nazis convene in your city! pic.twitter.com/96GzdwHG18

“The only color I see is green,” said one Griffin staffer when we pressed him on allowing white supremacists in their bar. That’s why DSA-LA and @NOlympicsLA are proud to partner with @defendnela to fight not just the racists in our communities but the gentrifiers who enable them pic.twitter.com/QVgaGtQ3CZ

this footage, which sure looks like a proud boy’s mom telling him it’s time to go home, was taken by Defend North East Los Angeles after this dude’s friends shoved a woman at their management-approved hate meetup at The Griffin. please enjoy. pic.twitter.com/7lsxvuXGF9