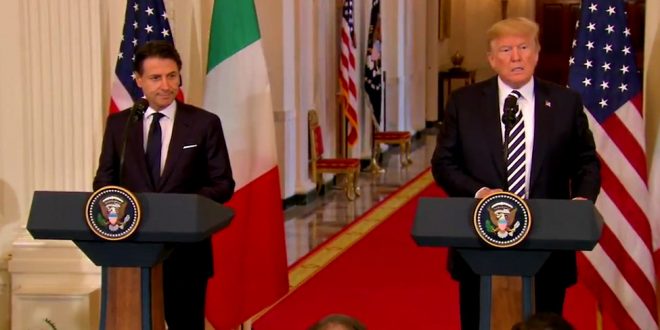 US President Donald Trump receives Italian Prime Minister Giuseppe Conte on Monday, welcoming to the White House a European populist with like-minded views on immigration and trade. The visit will begin with a one-on-one meeting followed by more extensive bilateral discussions, the White House said.

Trump praised Conte as “great” after meeting him at the recent G7 summit in Canada, where they warmly shook hands during the family photo.

Conte is “very strong on immigration — like I am, by the way,” said Trump, who has pursued a policy of “zero tolerance” for illegal immigration, a crackdown that led to hundreds of children being separated from parents who crossed into the United States from Mexico without papers.

Conte supports Trump’s demand that Russia be allowed to rejoin the G7, from which Russia was booted over their annexation of Crimea.

Pres. Trump praises the Prime Minister of Italy Giuseppe Conte’s immigration policies: “Italy’s taken a very firm stance on the border — a stance few countries have taken and frankly, you’re doing the right thing … a lot of other countries in Europe should be doing it, also” pic.twitter.com/vxjoDSLURo