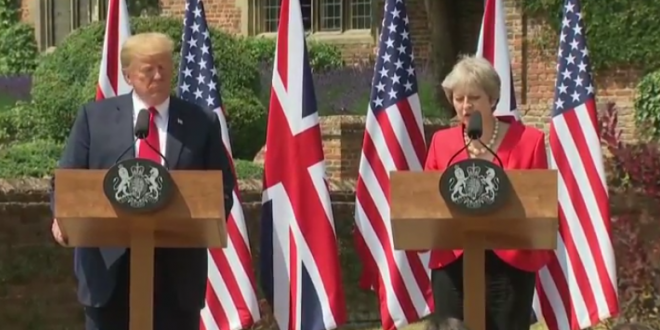 President Trump is holding a joint news conference with British Prime Minister Teresa May Friday, in the middle of his trip to the United Kingdom. Mr. Trump’s visit to Britain is sandwiched between the Brussels NATO summit, where he blasted allies over defense spending and trade, and ahead of his meeting with Russian President Vladimir Putin in Helsinki, Finland.

On the day before the news conference, the British tabloid The Sun published an interview with Mr. Trump in which he said he thinks Boris Johnson would make a great prime minister, and Britain’s trade relationship with the U.S. could come to an end if British Prime Minister Theresa May follows through with the so-called “soft” Brexit blueprint. The president made the comments ahead of meetings with May and Queen Elizabeth.