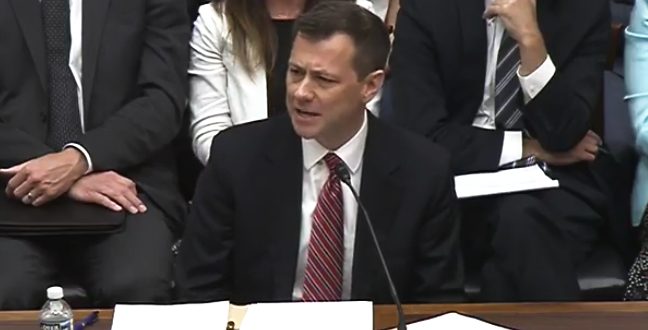 House lawmakers are poised to question Peter Strzok on Thursday in what is sure to be a lengthy, tense standoff between Republicans and the FBI agent who once worked on special counsel Robert Mueller’s investigation into Russian interference. Strzok has been in Republicans’ sights for several months after a Justice Department inspector general investigation revealed that he exchanged text messages before the 2016 election that were critical of Donald Trump with Lisa Page, a former FBI lawyer with whom he was having an affair at the time.

Mr. Strzok exchanged thousands of texts messages from 2015 through 2017 with a former FBI lawyer, Lisa Page, with whom he was having an affair. At the time, he was the lead agent on the probe of Mrs. Clinton’s use of a private email server when she was secretary of state, and later he helped spearhead the FBI’s inquiry into Russia’s interference in the 2016 election. The private messages were critical of Mr. Trump and politicians of both parties, including Eric Holder, President Barack Obama’s first attorney general. They leveled their harshest barbs at Mr. Trump, however, calling him a “douche” and an “idiot.”

Ex-FBI LAYER Lisa Page today defied a House of Representatives issued Subpoena to testify before Congress! Wow, but is anybody really surprised! Together with her lover, FBI Agent Peter Strzok, she worked on the Rigged Witch Hunt, perhaps the most tainted and corrupt case EVER!

How can the Rigged Witch Hunt proceed when it was started, influenced and worked on, for an extended period of time, by former FBI Agent/Lover Peter Strzok? Read his hate filled and totally biased Emails and the answer is clear!

Previous Ryan: I’m Betting On Kevin McCarthy As Next Speaker
Next BRITAIN: Russian “Whore Trump” Crop Circle To Greet Glorious Leader As He Flies To Meet Theresa May