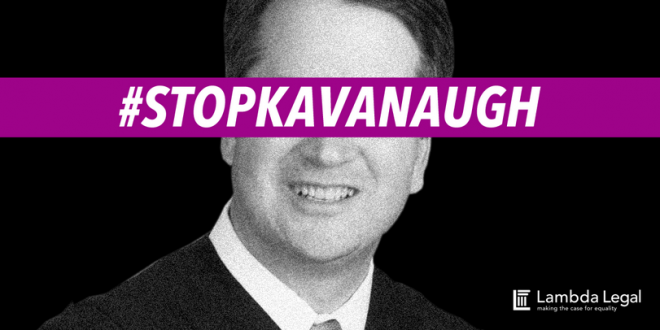 Judge Kavanaugh would guarantee 40 more years of Trump’s values on the Supreme Court. Like every other judicial nominee who has a seal of approval from the Heritage Foundation and the Federalist Society, Judge Kavanaugh shares Donald Trump’s same distorted view of the law. We have good reason to fear that Judge Kavanaugh will abuse his power on the Court to protect the wealthy and the powerful while depriving LGBT Americans of our dignity, demeaning our community, and diminishing our status as equal citizens. There is too much at stake to allow Judge Kavanaugh to sit on the Court that, over its history, has decided who can marry, who can vote, and who is equal.

Brett Kavanaugh may bring the requisite experience, but given Donald Trump’s promise to overturn Roe v. Wade, the decision that recognized the right to an abortion, and efforts to reverse progress on civil rights and civil liberties, that’s not enough. If confirmed, Kavanaugh could very well be the decisive vote Trump needs in the Supreme Court to give his concerted campaign to undermine civil liberties and civil rights long-term impact. And in light of President Trump’s promise to appoint justices who would overturn Roe, this nomination could jeopardize the right to an abortion millions of women and families have relied on for more than four decades.

From the National Center For Lesbian Rights:

To date, there is nothing in Judge Brett Kavanaugh’s record to indicate that he understands the real-world impact of discrimination on LGBT people or the importance of construing our nation’s laws to enable them to participate fully and equally in society. The Supreme Court must be a court for all, not just for the privileged few. It is sobering that a president who has shown disregard for many of our nation’s most cherished rights and freedoms has an opportunity to appoint a second justice to the Supreme Court. This moment is a wake-up call to LGBT people and others about the critical importance of elections and the need to vote this November.

This nominee was hand-picked by anti-LGBTQ, anti-choice groups in an explicit effort to undermine equality — and the prospect of a Justice Kavanaugh threatens to erode our nation’s civil rights laws, block transgender troops from bravely serving this nation and allow a license to discriminate against LGBTQ people in every aspect of American life. The 2018 midterm elections just became the most consequential elections of our lifetime, and we must seize the opportunity to pull the emergency brake on this regime. We need to vote this November like our lives depend on it — because they do.

If confirmed, Brett Kavanaugh will have the chance to codify President Trump and Vice President Pence’s dangerous anti-LGBTQ record and the agenda of anti-LGBTQ groups into law for decades to come. Like Neil Gorsuch before him, Kavanaugh is an ideologically driven pick designed to create an activist Supreme Court that will undermine rights and protections for women, LGBTQ people, immigrants, and all vulnerable people.  President Trump’s concerning selection of Brett Kavanaugh, and his record of appointing anti-LGBTQ federal judges, have put hard won LGBTQ rights and protections in jeopardy. GLAAD is encouraging people to contact their Senators and ask them to support pro-equality judicial nominations and oppose Kavanaugh’s confirmation.

From the Transgender Law Center:

Trump’s pick for the Supreme Court is a divisive, radical conservative whose appointment would pose a devastating threat to the rights and well-being of transgender people nationwide. We need a Supreme Court that will uphold the values of freedom, fairness, and equal protection enshrined in our Constitution, not green-light discrimination against transgender people, communities of color, immigrants, people with disabilities, and others under attack by this administration. The person who fills this seat will likely have a deciding vote on issues like health care, reproductive justice, and transgender people’s freedom to be our authentic selves and participate in public life, so our lives hang in the balance.