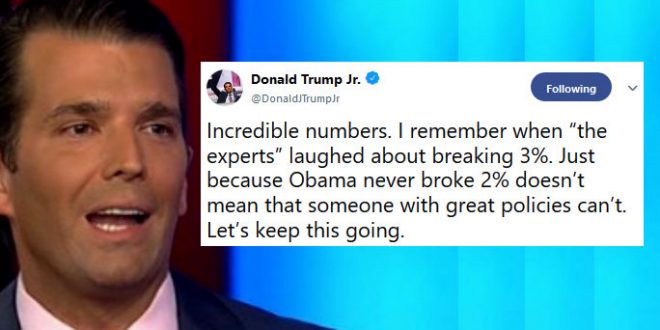 Donald Trump Jr. is a proud son. When he heard the news of the economy surging to 4.1 percent GDP growth, he immediately took to Twitter to tout his father’s achievements. There’s just one problem with Jr.’s claim: Former President Barack Obama did, in fact, break 2 percent growth on multiple occasions.

There were 15 quarters during Obama’s presidency when the economy experienced 2 percent growth or higher, data from the Federal Reserve Bank of St. Louis shows. Additionally, Trump Jr. is boasting that today’s rate is the fastest since 2014’s 4.9 percent growth — which he may recall was a year when a certain other president was in office.

Incredible numbers. I remember when “the experts” laughed about breaking 3%. Just because Obama never broke 2% doesn’t mean that someone with great policies can’t. Let’s keep this going. https://t.co/05LyLBw22j