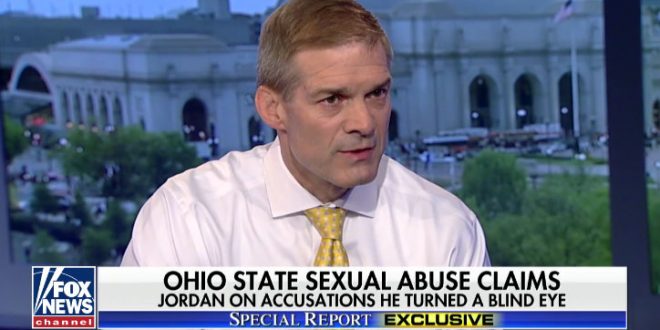 Jordan Again Says Accusers Are Lying, Says Timing Is Suspect Because Of His Bid For House Speaker [VIDEO]

Rep. Jim Jordan (R-Ohio) on Friday repeatedly denied claims that he knew of alleged sexual abuse taking place on the Ohio State University wrestling team while he served as assistant coach, while calling into question the timing of the allegations. Jordan said on Fox News’ “Special Report with Bret Baier” that the timing of the allegations was “suspect” after his widely publicized hearing with Deputy Attorney General Rod Rosenstein and his bid to become the next House Speaker. “Conversations in a locker room are a lot different than allegations of abuse or reported abuse,” Jordan said Friday, adding that “no one ever reported any abuse to me.”

Jordan dismissed claims by former wrestler Mike DiSabato, who said on CNN “Jim knew about what I call the deviant sexual atmosphere.” Jordan said DiSabato is being dishonest, has a criminal record and that CNN should have looked more closely at his background before booking him multiple times in one day in the immediate aftermath of the allegations’ emergence. Of the others who have accused him of turning a blind eye to the abuse, Jordan said he is “bothered the most” by those who “are saying these things that I know they know the truth.”

The situation was so egregious that former wrestling head coach Russ Hellickson would at times have to physically drag the gawkers out of the building, several sources familiar with his actions at the time said. Hellickson also pleaded with the university multiple times to move their athletes to a private facility, the sources said.

Jordan served as Hellickson’s No. 2, and the coach has been described as Jordan’s mentor. The accusations could exacerbate Jordan’s troubles. He was the wrestling team’s assistant coach from 1986 to 1994 and has adamantly denied knowledge of any sexual abuse.