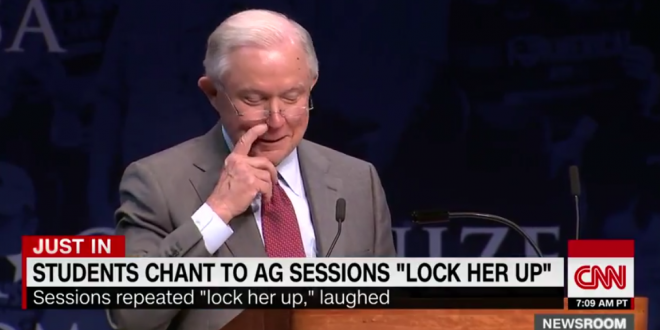 Jeff Sessions Laughs At “Lock Her Up” Chants [VIDEO]

Attorney General Jeff Sessions, the top law enforcement officer in the country, participated in a chant of “Lock her up” Tuesday, reviving a rallying cry from Donald Trump campaign events calling to jail Hillary Clinton.

Sessions was addressing a conservative group’s high school leadership summit in Washington, where he promoted free speech and conservative principles. Sessions criticized universities for “coddling our young people” and “actively preventing them from scrutinizing the validity of their beliefs.”

“After the 2016 election, for example, they held a ‘cry-in’ at Cornell. I hope they had plenty of tissues for ’em to cry on,” he said. “They had therapy dogs at the University of Kansas. Play-Doh and coloring books at the University of Michigan for heaven’s sakes. You know, give me a break. Students at Tufts were encouraged to ‘draw about their feelings.'”