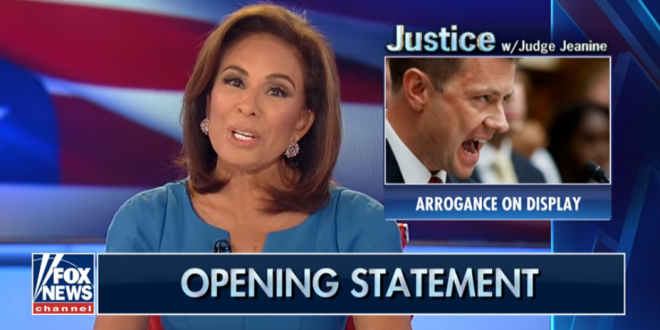 “Peter Strzok is the personification of the deep state itself, where fascism rules, where people in power don’t care what you think, but decide that they know better. The free-for-all in that hearing room was a sight to behold. But more than that, it was a microcosm of what the left has done when they want to shut down the right. Pent-up rage and pandemonium was an example of how angry the left is. While the Republicans conducted themselves in a genteel manner, the Democrats claiming parliamentary points of order blew their collective gaskets.” – State TV host Jeanine Pirro, whose montage of moments from the testimony of FBI Peter Strzok does not include any of the GOP’s many raging, spittle-flecked attacks.