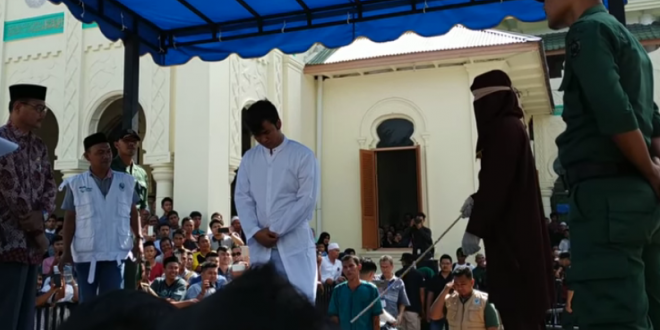 A gay couple was publicly whipped in Indonesia’s conservative Aceh province on Friday (July 13), despite an earlier pledge by officials to stop the punishment after it drew international criticism.

The two men were flogged more than 80 times each for having gay sex, which is outlawed under local Islamic law, as a jeering crowd hurled abuse at them. They were among 15 people whipped outside a mosque in the provincial capital Banda Aceh Friday for crimes also including drinking or selling alcohol and showing affection in public.

A crowd of about 1,000 people, including tourists from neighbouring Malaysia, snapped pictures and shouted “Flog them harder” as a hooded figure rained down lashes from a rattan cane on their backs.

Earlier this year Indonesia’s Parliament began considering a bill that would criminalize all sex outside heterosexual marriage.