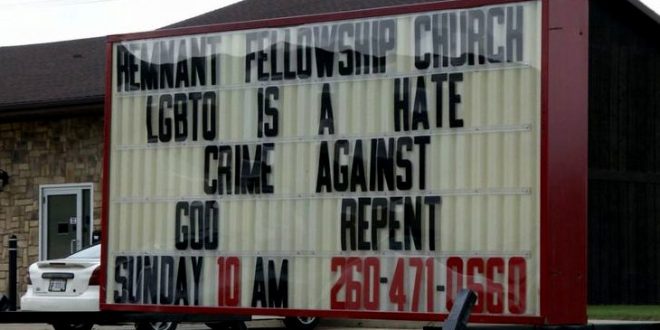 An Auburn church with a controversial message on a sign has been forced out of their building. ABC21 reached a church member by phone Saturday who confirmed the news.

On Wednesday, June 27, Remnant Fellowship Church in Auburn posted a sign reading, “LGBTQ is a hate crime against God. Repent.” When asked whether or not the church has plans to relocate, the church member had no comment.

ABC21 previously spoke with a pastor of Remnant Fellowship, who said at the time their message is an attempt to “…reach young people and steer them away from a lifestyle they believe is harmful to them.”

WANE reached out to the church and spoke to Robert Sturges, an elder at the church. He said the sign simply conveys what the Bible says.

“We’re trying to reach a certain group of people, Sturges said. “They’re being told in our culture that homosexuality, transvestites, lesbianism, and sexual immorality is ok. But the Bible clearly says that those who practice these things will not inherit the Kingdom of God. In fact, it warns them that the wrath of God will abide upon them. And in the judgment, they will be lost and they will be sent to hell forever. We believe that. That’s our faith.”

“Even the schools are telling the kids ‘go ahead and experiment.’ They’re going to destroy kids at young ages,” said Sturges. “They’re opening themselves up to disease and mental illness and making them the enemies of God, who calls them to sexual purity. That’s why we put the sign up.”