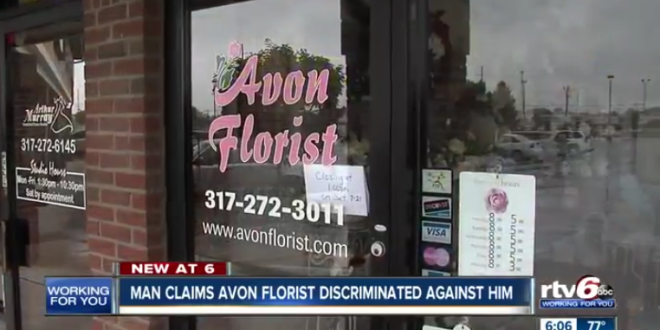 A man claims the owner of a floral shop in Avon decided not to help with his wedding when she learned he was going to be marrying another man. David Elliott says he went to Avon Florist on Rockville Road on July 19 and he posted about what happened at the shop afterward on his Facebook page.

RTV6 went to the floral shop Saturday to get the owner’s side of the story, but the shop had closed earlier than posted business hours. We also called the shop and left a message. A man who identified himself as Greg Harris called back and said he had no comment to make about the alleged incident.

The customer claims the owner asked about his bride and when he responded that there is no bride, she announced would be going on vacation and couldn’t help him. Hit the link for a video interview with him. Avon Flowers owner Rita Harris disputes Elliott’s version of events. She denied telling him it was because he and his fiancée are a gay couple. “I never said that to him,” she told LGBTQ Nation in an exclusive interview. “What I said to him was that it conflicted with a vacation I have planned and I wasn’t taking any more orders at this time. I’m not planning to take any more weddings requests because I’m planning to retire,” she said.

Elliott insists that Harris’ story is meant to cover up for her decision not to serve the couple. “She only declined after I told her there was no bride,” Elliott told LGBTQ Nation exclusively. “I told her I needed flowers for my wedding and the date. She said ‘okay.’ I then said I needed two boutonnières and she said, ‘What for the bride?’ I said there isn’t one and she said, ‘Oh, I’m going on vacation.’ She was only going on vacation after she knew there was no bride.”