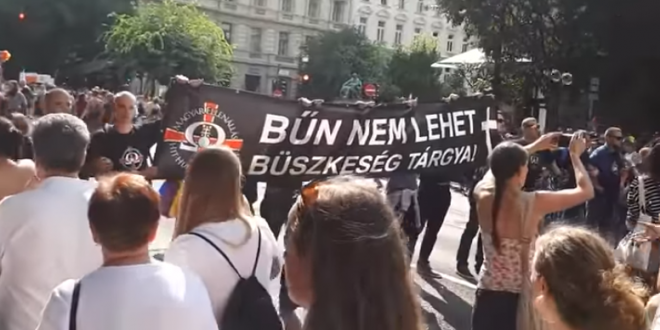 A group of fascists menacingly blocked the path of thousands of people marching in Budapest Pride over the weekend. More than 10,000 people attended the 23rd Pride event in the Hungarian capital. But a group of men who belong to the Sixty-Four Counties Youth Movement stood in a line along the parade route. They stood silently while holding banners, not allowing the parade-goers to pass. People in the parade peacefully chanted at the men, while some played musical instruments and waved rainbow flags near the fascists. Some people on the ground reported feeling threatened by the police presence until they realized they were there to remove the fascists.

The description of the first video below roughly translates as “HVIM members saw and participated in the 2018 Budapest Pride event. They were lurking amongst the marchers. Sin can not be the object of pride.”