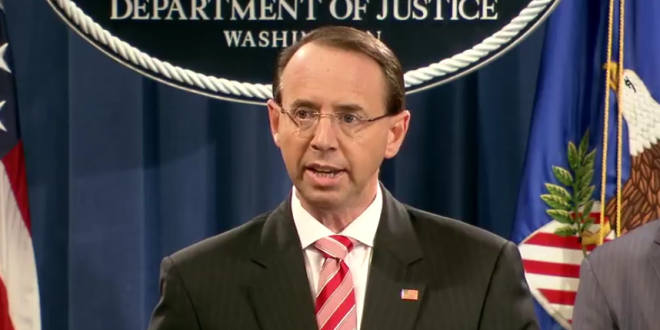 Today’s indictments are only speeding up the plan:

House conservatives are preparing a new push to oust Deputy Attorney General Rod Rosenstein, according to three conservative Capitol Hill sources — putting the finishing touches on an impeachment filing even as Rosenstein announced the indictment of 12 Russian intelligence officers for interfering in the 2016 election.

House Freedom Caucus Chairman Mark Meadows, in fact, had the impeachment document on the floor of the House at the very moment that Rosenstein spoke to reporters and TV cameras Friday. Conservative GOP lawmakers have been plotting to remove Rosenstein for weeks, accusing him of slow-walking their probe of FBI agents they’ve accused of bias against President Donald Trump.

Conservative sources say they could file the impeachment document as soon as Monday, as Meadows and Freedom Caucus founder Jim Jordan (R-Ohio) look to build Republican support in the House. One source cautioned, however, that the timing was still fluid.